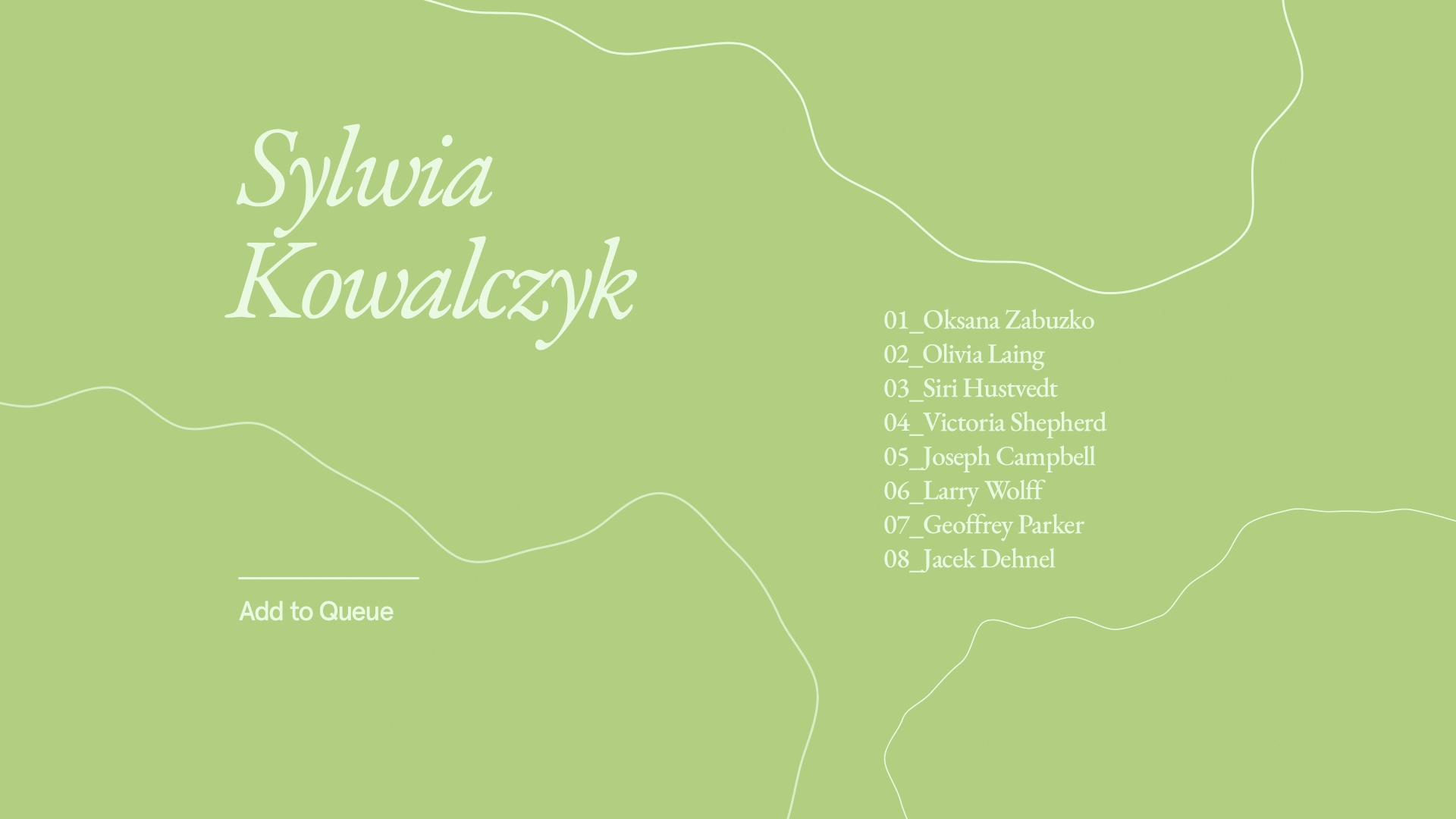 A selection of curated media lists from our global community

I would like to start with an apology, for I’m not a big reader of fiction – pretty much all the books on this list are those that sooner or later end up in some way in my research for various projects I work on. I’m also one of these people who read several titles simultaneously and have a never ending ‘tsundoku’ pile by their bed. I’m dreading to admit that I’m also a snob, judging other people by the content of their home libraries. Funnily enough, as a photographer I do not tend to buy many photography books; just a select couple a year. This year I’m holding off for a new book from Chris Floyd and a new selection of found negatives from Saul Leiter.

Oksana Zabuzko is a contemporary Ukrainian writer, poet and essayist. She was recently in Edinburgh speaking at the Scottish Parliament about the consequences of war for the culture in her home country. I’m very privileged because, as I can read in Polish, I was able to read her latest collection of essays – ‘The Planet Wormwood’ – that came out in Poland just days before the start of the Russian invasion. Another of her excellent books, ‘Fieldwork in Ukrainian Sex,’ [1996] came out in English. Her writing explores themes of identity, gender and colonialism in a clever, extremely well researched and sometimes even ruthless way. The story of her meeting with Josif Brodsky struck a deep chord in me. She is ‘the voice of ‘the Third World’, the voice of the ‘second sex.’ The voice of the colonised.’

Olivia Laing’s essays were my lockdown discovery. I started with ‘Funny Weather,’ which is her latest, then rushed to get everything else from her that was available. Beautifully printed [I used to design book covers for a living!] by Picador, this book of essays is a tactile treat for the fingertips and for the brain. These essays are a persuasive case for why art matters and why it can change our perception of the world. Her tender writing on photographer and activist David Wojnarowicz was my favourite.

Siri Hustvedt’s ‘A Woman Looking at Men Looking at Women – Essays on Art, Sex, and the Mind’ easily wins the top spot of the most dog-eared volume in my collection. I was very fortunate to meet the author during the Edinburgh Book Festival several years ago and hear her talk on Surrealism and memory, which are two main areas of interest for me. Hustvedt’s writing always triggers questions on what is real and what is imagined, which also interests me in my photography. I’m currently working on a new idea that explores what turns an imaginary state into an actual one, and Hustvedt’s writing makes me sit down and reconsider my line of thoughts and ideas.

Victoria Shepherd’s ‘A History of Delusions’ is firmly in my ‘research read’ pile on ‘a murky brew of real life and imaginative fantasy’ – but it is also a very enjoyable and compassionate read. We are living in times that prove to be a heavy burden on our mental health load and the recent economic news does not help, either. It is consoling to see that people in the centuries before us were tackling similar problems and were trying to find solutions for them; since these times, we have moved on significantly in our ways of treating and approaching our collective anxieties and traumas. Our minds create extraordinary worlds, indeed. Now I just need to visualise these.

Joseph Campbell’s ‘The Power of Myth’ was one of my favourite book covers that I designed, for the first Polish edition. It is a collection of conversations between anthropologist Campbell and journalist Bill Moyers. It is uncanny that these conversations took place on George Lucas’s Skywalker ranch, because Star Wars is one of the most myth-steeped pop culture extravaganzas that exists. I work a lot with myths and traditions of culture in my images, attempting to find new stories for my photographs within this base of the human history library. However, if I were to recommend a more modern approach to myth it would no doubt be Charlotte Higgins’s essays on Greek myths tackled from a female perspective.

Larry Wolff’s ‘Inventing Eastern Europe: The Map of Civilisation on the Mind of the Enlightenment’ is a hefty volume, but a breezy read thanks to the intelligence and wit [and also impeccable research] of the NYU professor. It tackles multiple national stereotypes present in the Western cultural cycles since the 18th century and really makes you think who decided how Europe should be divided, why it was done the way it was, and if this division should be challenged. Meanwhile, it presents a wonderful perspective on that inevitably grey and muddy, rough, hospitable, full of vodka and ambitions part of Europe from characters like Casanova [who almost became a PA to the last Polish king, but unfortunately bedded someone who he should not have bedded and had to run away from the consequences, destroying his glittering prospective career in the process]. There is also a Scottish accent in there, as in Adam Smith’s writing Poland is mentioned only once, and in one sentence only.

Geoffrey Parker’s gloomy sounding ‘Global Crisis: War, Climate Change and Catastrophe in the Seventeenth Century’ is not an easy sell by any means, with over 800 pages, but when one of my favourite podcasts, ‘The Rest is History’ mentioned the book [I love editing at the studio while listening to podcasts, and this one is simply excellent – as is ‘In Our Time’ on BBC] I simply had to get it. It emphasises climate instead of individual agency and helps to explain socio-economic change that can be related to our own times – are we prepared to learn from environmental history and cope with the crisis?

Jacek Dehnel is one of the most versatile and intriguing contemporary Polish writers. I do not read much fiction, but I always make an exception for him. His debut novel ‘Lala’ [translated by Antonia Lloyd-Jones. Oneworld Publications, London 2018] was recommended by me to countless friends who wanted to read some contemporary Polish literature, but found Olga Tokarczuk’s Nobel Prize winning ‘Books of Jacob’ too long winded and difficult to relate to. In case you’d enjoy some lighter reading from Dehnel, he also co-writes a series of very entertaining crime novels with his husband which were translated into English. Personally, I’m a big fan of his long rants on social media from visiting various art galleries and art collections around Europe [he is based in Berlin].

Become a boom saloon member to help support our work

A note: Each month, we update our site as part of our efforts to reduce the environmental impact of our digital estate. The global emissions from the digital industry are on a par with those from the aviation industry, at almost 2% of total global emissions. What’s worse, this is increasing year on year. In an effort to lessen our impact, each month we delete previous features and update our site with new content. Throughout the month, our current features are available to download or save for free for all boom saloon members, allowing you the chance to hold onto your most treasured stories and collections – support our work and become a member by clicking here.